Stretching my legs with a passeggiata in Sora, Italy

I’ve long been curious to visit the town of Sora, in Italy’s Lazio region and located in the province of Frosinone – just along the border with Abruzzo.

Since it’s a little off the beaten trail from the surrounding areas I visit more often (including the wonderful Parco Nazionale d’Abruzzo), I’ve never managed to get there.

This summer, however, as I was dropping one child off at tennis camp in Abruzzo and picking up another at running camp in the southernmost point in Lazio, I noticed that the long trip between the two destinations happened to take me by Sora.

And so I finally visited the town on a sunny Sunday in July – and after all the driving behind me and all that ahead of me, it was the perfect excuse to park, stretch my legs and explore the town.

This town with a population of a little over…

Save time for Orvieto’s Etruscan Museum

There’s so much to see when you’re visiting the medieval Umbrian town of Orvieto, that you may forget to stop by the Fondazione Museo Claudio Faina, but that would be  a mistake.

This museum, which houses both the collection of the Faina Counts and Orvieto’s civic collection, is most impressive for its Etruscan objects – this is after all, one of the regions most associated with Etruscan civilization. But there are also impressive items from Ancient Greece and Rome.

And the noble home with its frescoed rooms in which the collection is held – just across the piazza from Orvieto’s impressive Duomo, and boasting spectacular views onto the Duomo’s 14th century mosaic facade – is worth the price of admission alone.

Conte Claudio Faina (1875-1954) seems to have been an obsessive collector of Etruscan artifacts. 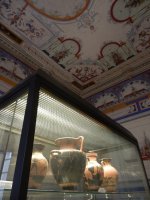 Many are from nearby Etruscan tombs, but it seems he also had close ties to…

One of the (many) great things about living in Rome, Italy is keeping your eyes pealed for all the famous authors/composers/sculptors/artists who once called the Eternal City home.

Not surprisingly, one such illustrious resident was the Roman sculptor Gian Lorenzo Bernini (1598-1680). Although I knew Bernini lived and worked in Rome, I didn’t know where until I saw the plaque. Turns out we were pretty much neighbors, albeit with a pesky four centuries separating us.

Bernini lived and had his studio on Via Liberiana, off of Via Merulana and on the edge of  the Monti and Esquilino neighborhoods, and across the street from the Santa Maria Maggiore basilica. It was in this studio that Bernini carved his greatest masterpieces – Hades and Persephone and Apollo and Daphne.

Apollo and Daphne played an important role in one of my novels (not the Bernini statue version, but the Tiepolo painting believed to have been based on it)…

Sulmona is a small town in the region of Abruzzo. It is located near one of Abruzzo’s three national parks: the National Park of the Majella.

The town dates back to before the Roman Empire, but it was the era of the Roman Empire in which Sulmona boasted its most famous resident: Publio Ovidio Nasone, best known by most school children as Ovid, the author of the Metamorphosis.

Ovid was born in Sulmona in 43 B.C. and he achieved great success during his lifetime, until his criticism angered Emperor Augustus, who banished the poet to the outer reaches of teh Empire, in modern-day Romania. 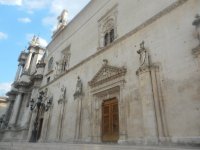 But the architecture of  ‘modern’ Sulmona has…