What sound does Sunday make where you are?

Today I’ll post this song, always by Zucchero. It’s a little melancholic… But it is good for you to hear the Italian language. These lyrics are very simple and he sings here very slowly and sweet…

What sound does Sunday make where you are?

Meeting Pietro Bernini on a walk

In Italy, when you go out for just a walk (and if you are not in a hurry without looking around yourself and deep in your thoughts), and maybe you have your camera with you, or your mobile phone to make a photo just in case, you can very often discover things. So, after a long way, and having crossed a garden with a lot of people, who were laying in the sun, who were talking with friends, who were reading on a bench, watching children play football, running free and going happy on the swing, and then overtaking a school of music right out of the garden, hearing with pleasure from an open window a nice sound of a saxophone, and soon after, another one, maybe of a student this time… 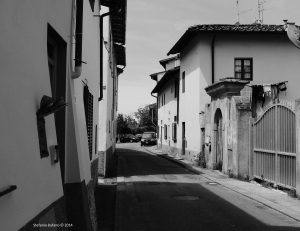 I looked at a wall, in an old and not so beautiful road as you could imagine: it’s a place not really important for tourists. Just an old narrow street, with old houses where one day there was countryside, where I don’t think people too rich lived there, maybe people who were doing handicrafts, meanwhile others cultivated lands, which in part you can still see if you walk there, and also you can see in the distance through those fields big roads that connect towns near Florence. 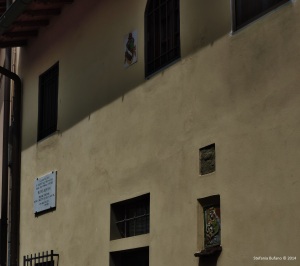 Just in that direction you can see airplanes fly, depart and land, from the near airport of Florence.

But back to what I have seen. Here was born in a little house, Pietro Bernini, a very important Italian sculptor, exactly on the 6th of May in 1562. He studied in Florence and lived and worked in Naples (where his son Gian Lorenzo was also born, also a sculptor, painter and architect) and Rome. He made monumental sculptures, with other’s sculptors, like Fontana del Nettuno and Fontana del Gigante (in Naples), and the very famous fountain Fontana della Barcaccia (in Spanish Square in Rome).

But the walk was yesterday. Unfortunately, I often do very strange things: like going out, sometimes without a camera or mobile phone, feeling free from all, without anything apart from my house keys. So when I saw the writing “6 Maggio” I thought: I must come tomorrow to make a photo of it, on the 6th of May, today! 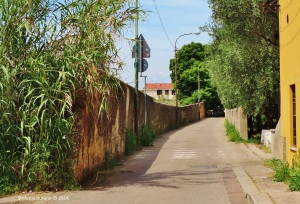 Around the house where was born Pietro Bernini

The gift of Vivian Maier

To demonstrate that in the world there are people who work with passion to their art, without the craving for instant recognition and are able to remain so concentrated, day after day, month after month, year after year, in their pure research and between, very often, to material difficulties or obvious social disadvantages that do not allow to reach, in life, nor a material tranquility, nor a deserved success, there is a street photographer Vivian Maier.

Born in New York in 1926, lived as a child in France, returned to the U.S. with her mother, and after the early years of life without her father, she had to fend for life doing a job as a babysitter, it is supposed in some way having to give up to her passion, according to the more or less unfortunate vicissitudes. In some way: given the incredible amount, qualitative and quantitative, of her photographic archive.

Little is known yet about her and her life, even if as a result of its “discovery” by merit – and fortune – by John Maloof (unfortunately discovered almost simultaneously with the death, in 2009, of the photographer, which Maloof, he set about her tracks, he came to the obituary) it quickly started to talk about it, because she was a great photographer, but you can easily deduce that in the years when she was printing not even her photographs, limited herself only to the shots, it should be in a difficult time regarding the “make ends meet”, or indulge in the “luxuries”. Snapped, “saw” her photographs outside and inside the photographic objective, but the majority of them she did not see ever printed, nor exposed, recognized and shared.

Everyone, when you stand in front of an unknown talent in life, with very few elements still to reconstruct the biography, it is more fascinated, tends to raise questions and to formulate hypotheses. Why, for example, she did not try to “sell” her photographs, when she was forced, in fact, to live very modestly and finally, now elderly, to die in poverty, having indeed to “sell off” her possessions for a handful of dollars, as you might with things of little value?

This, among the many questions that may arise, meeting the wonderful and simple story of Vivian Maier, would seem to be the most widespread and obvious, especially in a Western world dominated by money God, selfishness, competition, the “professionalism recognized” and by the lack of love for what we do.

Very few we believe who are now part of this Western world, “rich” and “evolved”, may include naturalness, love, authenticity of certain persons who, not surprisingly, often end up being (considered) “eccentric” and to make strange paths, often in total solitude, perhaps, who knows, to avoid intransigent “criticisms” about what you should or should not do, or “encouragements” to monetize as soon as possible… Having long been subtly thrown in the majority that if you do well a thing should therefore be paid, and therefore recognized that only this is equivalent to existing, only becomes automatic in the thought in the same conformed majority that we can not do it, and well, to do it in any case.

And here certainly we don’t want to encourage the exploitation of the artists (as any other human being), already heavily exploited and often starved in History, but only highlight the current paradoxical reversal, so if I sell valgus, and until I do not sell, I do not produce (= do not create, I’m not doing anything, I do not exist), which is a fake almost total: if some, and unfortunately happens, interrupt their art for lack of income or other difficulties, many others continue anyway.

The reality is that there is no single model for to be an artist, and that the only true constant is work and love for what we do. The purity, if it still exists somewhere, it is only in children and in those who have the same attitude, the same concentration and resists only in a few artists who do not follow any “trend”, no “market”, no any “study at the table of what could have success”. Softly, remind us you that it’s the artist, if anything, who studies what may seem to have sense, who creates, who invents a “trend” that possibly others, and the market, will follow, and not vice versa. And that every dictatorship, softly again, starting from that of the market today that all dictatorships wins, go to the devil.

We could even say controversially that judging by what has “success” in the Western world today, will be good in a certain way not to be recognized, not apparently exist, to have any chance not to lose along the way, the sense of our own, very personal, exciting research.

So, in a world always less human, in the sense of always less authentically human and vice versa increasingly fictitious, Orwellian, so devoid of ideas that enlighten and enrich, or rather try to filter these to the fullest, with scientific malignancy (typical of those who are against the life and freedom of expression), until they disappear for the “success” of above enormity of useless things to a mass which you want always more shapeless and stupid, some rich people insist, even having a very modest life, to create and donate.

Vivian Maier went straight to her own way and in her research. In her free time from her job, here it is in her real work, with her camera around her neck that snaps, without being able to see the results, printed, of her work, but seeing them very well, in her eyes.

Now, only those who did not become completely stupid in the idea of “profit” at all costs (which would be equivalent, as a Law, to “to be”, or “really worth” or “deserve” a higher existence of “success and happiness”) in the cynicism and total existential vacuum coated of apparent beauty, can, and should, thanks to her for all that with sacrifice she must have done and for all that to the world she has given.

To see her is a Picture –
To hear her is a Tune –
To know her an Intemperance
As innocent as June –
To know her not – Affliction –
To own her for a Friend
A warmth as near as if the Sun
Were shining in your Hand.

An extraordinary event today on the 27th of April, at 10 AM, in St. Peter’s Square, Vatican City.

Two billion people in the world will follow the event at home in 3D, on TV and on streaming.

Meanwhile, there will be numerous big screens at various points in the city of Rome, that is expecting 800.000 pilgrims to attend the canonization, as well as numerous Heads of State, Prime ministers, ministers and delegations representing several countries.

The Canonization of John Paul II and John XXIII in 3D

In Italy every year on the 25th of April it’s Liberation Day: it’s the Anniversary of Liberation of Italy, or also called the Holiday of 25th of April. It’s an important day, started since 1945, commemorating and representing the end of the second world war, the end of the German nazist occupation in Italy, the end (after twenty years) of the fascist regime in Italy and the holiday for “Resistenza italiana” (Italian Resistance), or “Resistenza Partigiana” (Partisan Resistance), which has been very important to combat Italian fascism.

The voice that you’ll hear on the radio, on 25th of April 1945, that is giving a message to Italians, it’s that of Sandro Pertini, an important partisan, who many years after (1978) became the President of the Italian Republic: “Citizens, workers: general strike against German occupation, against fascist war, for the salvation of our lands, our homes, our workshops. Like at Genoa and Turin, place the Germans in front of the dilemma: to surrender or to perish”.

Yesterday I thought about a song to post for you.

I was listening to a beautiful song, of a famous Italian songwriter, musician and singer. His name is Zucchero Fornaciari, but in Italy we just call him Zucchero (which means sugar!).

I think he is quite famous also around other countries, maybe you have already listened to him. If not, I really would like to give you a link of the song I was listening to.

Zucchero is particular also because he sometimes sings half in Italian and half in English (he has done many such beautiful covers, too). Obviously, you can find translations too about all the songs and the original lyrics.

Perhaps you already know that it means “All the colors of my life”.

I have been on Zucchero’s web site and I have read that he’s started
in this period a new tour, in America! So, if you’re near one of
Zucchero’s concerts, you could go to see him!

For those who live in New York: 23th of April at Madison Square Garden
in New York!

If you would like to read about the tour, you can do it here